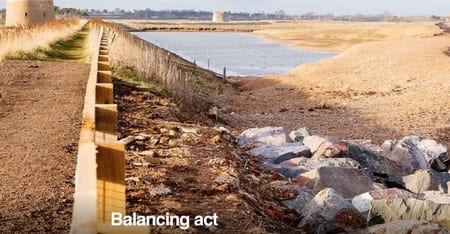 The UK economy is more unbalanced today than ever before.

We had a recent meeting with Darren Winder of the Lazarus Partnership – Darren has been a very valuable input into our investment process for many years and his extensive knowledge and database on the UK economy is pretty much unsurpassed.

We covered a lot of ground during the meeting, but some charts really stood out. Here we provide a few of them, which we believe provide strong evidence of the continued imbalances within the UK economy and the unsustainable nature of recent economic growth.

First, the household savings ratio. UK households are saving less now than ever before – at least as far back as records go, which is the mid-1960s. The average household currently saves less than 4% of its income each year – we are a consumer economy but surely a higher savings rate would be a positive step towards a more balanced economy, capable of delivering long-term prosperity, not least because in a theoretical sense savings should equate to investment?

It was widely acknowledged as we emerged from the financial crisis that the UK savings rate was too low – there was considerable talk about the desire for a higher savings rate in order reduce the UK’s vulnerability to shocks in the future. This clearly hasn’t happened. 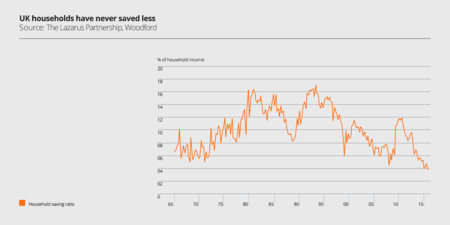 Second, house prices, which never fully corrected in the aftermath of the financial crisis, have started to rise again and, with incomes barely growing, the valuation of housing is increasingly stretched.

We don’t think this is sustainable at all. The chart below shows how the price / income ratio of the UK housing market is now very close to the levels it reached just before the financial crisis and as Sir Isaac Newton famously demonstrated, what goes up must come down eventually. 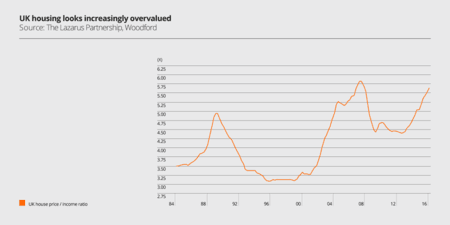 Third, the current account deficit is also at an all-time extreme, currently representing approximately 5% of UK GDP. We have a service surplus, but the amount of goods that we import has never been higher!

Again, policymakers talked extensively about the need to reduce the UK’s dependence on a few service-based industries and rebuild the economy’s industrial manufacturing and export base. In the real world, this simply hasn’t happened and UK industrial production is now officially back in recession.

The UK economy has been stronger than we had expected in recent years and has been growing at a moderate pace relative to global growth.

However, this unbalanced progress, if we can call it as such, has been driven by unsustainable forces and an excessive reliance on consumption. Usually, if an economy becomes as unbalanced as this, something has to give.

Consequently, we now expect a weaker outlook for the UK economy – not necessarily a recession but a period of slower growth. This view isn’t dependent on the outcome of the referendum – we continue to believe that the economic implications of Brexit would be largely irrelevant in a longer-term context, as previously argued.

As such, the portfolios are positioned with weaker domestic growth in mind. Our investment strategy is driven by a global perspective rather than a local one. Many of the companies we have invested in have little or nothing to do with the slings and arrows of the UK economy.

Meanwhile, the fate of our early-stage businesses will be determined by the progress they make towards commercialisation, rather than their exposure to the economic cycle.

With the portfolio positioned in this way, we remain confident about future returns, in spite of the UK’s economic headwinds.

Discretionary Fund Managers (DFM's) are firms that employ expert teams of individuals to research and analyse key data and metrics to help steer client investments through the sometimes 'choppy waters' of equity and commodity markets - TAM International and Momentum Fund Management are hugely experienced and well versed to help.