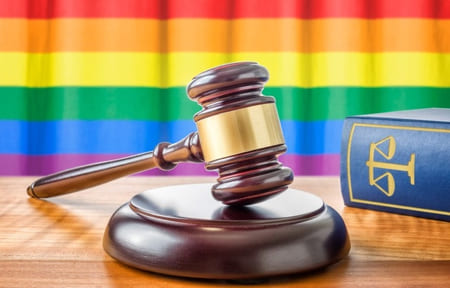 On Wednesday, John Walker won his long-running legal battle to allow his husband to inherit the same percentage of his defined benefit (DB) pension that a female partner would be entitled to.

Under existing rules, occupational pension schemes pay out 50% of the value of a pension to a spouse for the rest of their lives after their husband or wife dies - without taking the marriage date into account.

However, an exemption in the 2010 Equality Act allows companies to limit pension benefits for surviving same sex spouses, to benefits accrued since 2005, when the Civil Partnership Act came in.

This means that companies do not have to pay out the full pension benefits to a civil partner in a same sex marriage on pensions built up before 2005.

However, the Supreme Court has now ruled that Walker's husband - who is in his 50s - would be entitled to a spousal pension of about £45,000 a year in the event of his death, rather than around £1,000 a year.

“The courts today have removed a barrier to equality."

Judges ruled that the exemption under the equality act is "incompatible with EU law”, which states it is discriminatory for an employer to treat a married same-sex partner less favourably than a heterosexual spouse.

The case relates to Walker’s DB pension with chemicals group Innospec, where he worked between 1980 to 2003.

During that time, he made the same contributions to the pension scheme as heterosexual colleagues.

Having entered a civil partnership with his now-husband in January 2006, which was later converted into a marriage, Walker expected his spouse to able to inherit his pension on his death.

However, Innospec refused to pay a full spousal pension, because Walker's service began before 5 December 2005 - the date civil partnerships became legal in the UK.

Walker won an employment tribunal in 2012 to secure his pension rights, which was overturned on appeal by Innospec two years later. That decision was upheld by the Court of Appeal in 2015

Max Orbach, a trust and estate specialist at law firm Russell-Cooke, said the ruling is welcome clarification and has the potential to “dramatically change” the lives of same-sex couples.

“However, on the death of a loved one, the position regarding entitlement to their pension is far from straight forward and will inevitably depend on the specific terms of their pension. The differences in entitlement can be life changing, as this case has demonstrated,” he added.

France O’Grady , General Secretary of UK trade union TUC, said: “Pension law must catch up with the times, and discrimination against same-sex couples and those in civil partnerships must end.

“The courts today have removed a barrier to equality. This ruling must end a system that has left thousands of people with added stress when they are grieving for loved ones.

“The ruling results from the equality rights that come from the EU. The government must make sure that the Repeal Bill, and the Brexit deal, do not allow these rights to be rolled back after Britain has left the EU.”

Keep on track - review your pension arrangements with us now